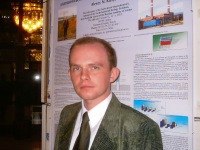 Murmansk regional branch of the Association of Orthodox Christian Scholars was established in 2013. At the moment administrative support team consists of 4 people.

The key aim of Murmansk regional branch is to implement the following Association of Orthodox Christian Scholars’ special programmes:

Fields of his scientific interests include ecological monitoring of land- based ecosystems, radiobiology, physiology and biochemistry of plants, rational environmental management, sanitary and hygienic assessment of the condition of the environment. Spheres of his research are zones of working of main industrial plants of Murmansk region( Join Stock Company “ Kola Mining and Metallurgical Company”, “KAZ-SUAL”, Kola Nuclear Power Plant). Alexey Kizeev has got 100 published works, including the articles in Academic journals.  Alexey’s scientific research “ Influence of aerial technogenic factor on ecological and physiological condition of vegetation in the central part of Kola Peninsula” was included in the number of the best scientific works of young scientists and also was commended in the competition in honour of Kola Scientific Centre of RAS(2005).His another work “ Influence of industrial emissions on the condition of forest ecosystems in industrially developed regions of Kola Peninsula” was given a certificate of attendance in the competition of scientific works of young scientists and specialists of Murmansk region.

Murmansk regional branch of the Association has the following key goals:

-    Missionary work on the Internet. Group of  Eparhial St. Feodorit courses in social network VKontakte was created( vk.com/club51874512). At the moment administrative support team consists of 70 people, all of whom attend the courses. Current questions are discussed in the group. The  members also swap scientific, methodical,  and spiritual information. Along with this, personal consulting of people interested in questions of Orthodoxy is done through the social network VKontakte and Odnoklassniki. The administrator of the group and Internet consultant is Alexey Kizeev.
-    Hosting events and activities of spiritual, moral, aesthetic, and educational significance( lectures in Sunday schools for adults in the parishes of church of Vernicle in Kirovsk and The Holy- Dormiton church in Apatity). The teachers are: A. Kizeev, I. Semenova, L. Konstantinova.
-    Organizing pilgrimages. In June 2015 a pilgrimage to Orthodox shrines of the Tersk shore of the White Sea was organized for parishioners of churches of Kirovsk and Apatity ( the organizer, guide,  and route planner was A. Kizeev). During their travel pilgrims became accustomed to the history of churches of the Tersk shore of the White Sea, their importance for Kola Peninsula in the Middle Ages, with tragic circumstances during Godless government’s reign, events of Modern Times, connected with rebuilding of churches and cathedrals. Pilgrims worshipped reopened churches’ shrines.
-    Realization of research projects in the light of Christian Values, a detailed research of viability of the White Lily( Lilium Candidum L) from a Miraculous Icon Panagia Krina, which was brought from Greek island Kefalonia.