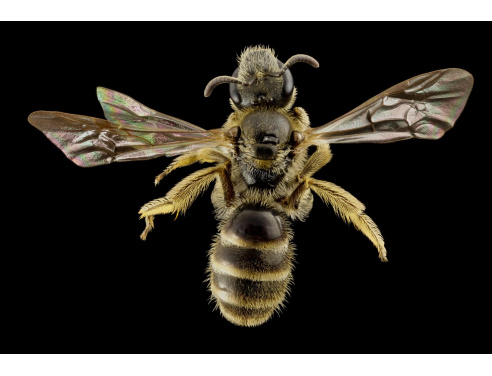 As bees' social behavior evolved, their complex chemical communication systems evolved in concert, according to a study published online by the journal Proceedings of the National Academy of Sciences.

An international team of researchers, including those from Princeton University, reported that a certain species of bees, called halictid bees, have more sensorial machinery compared with related solitary species. The difference is measured by the density of tiny, hollow sensory hairs called sensilla on their antennae.

Because social living requires the coordination of complex social behaviors, social insects invest more in these sensory systems -- used to communicate information about resources, mates and sources of danger to their colonies and, therefore, are integral to survival -- than their solitary counterparts, according to Sarah Kocher, an associate research scholar at the Lewis-Sigler Institute for Integrative Genomics and the paper's corresponding author.

Kocher and her colleagues imaged the antennae of adult females from 36 species that Kocher netted in the wild, mostly in France, or secured from specimens from the Museum of Comparative Zoology in the Department of Organismic and Evolutionary Biology at Harvard University and the American Museum of Natural History in New York. Using a scanning electron microscope at Princeton, they obtained information about the antennae's surface topography and composition and observed convergent changes in both sensilla structures and the chemical signals of the groups as sociality was gained and lost.

Kocher and her colleagues chose to examine halictid bees because they exhibit remarkable diversity in social behavior, from eusocial to solitary. Eusocial refers to an organizational structure in which individual insects in a colony forgo their reproductive capacity and perform a specific task, such as caring for young or gathering food, as seen in many ant, wasp and honeybee species. Also, within this family of insects, social behavior has evolved independently several times, and there are numerous examples of reversion, or a reappearance of an earlier physical characteristic, and replicated losses of sociality. These repeated gains and losses make the species one of the most behaviorally diverse social insects on the planet, and good candidates for studying sociality, according to Kocher. "What we have is a system with tremendous comparative power," she said.

Relatively little is known about the evolutionary transition between solitary and social living, according to Kocher. But in this paper, "[The researchers] provide an elegant solution to this problem," said Tom Wenseleers, a professor of evolutionary biology at the University of Leuven in Belgium who is familiar with the research but had no role in it. "By studying a group of primitively eusocial insects that evolved sociality more recently and on several occasions reverted back to a solitary lifestyle, [they] succeed in making an accurate comparison of the investment in chemosensory systems made by social and derived, closely related, nonsocial species."

In the paper, the researchers also noted that ancestrally solitary halictid bees -- those bees that had never evolved social behaviors -- had sensilla densities similar to eusocial species, while secondarily solitary halictid bees -- those bees that evolved from social to solitary and back -- exhibited decreases in sensilla density. Kocher was surprised by these patterns, but concluded that "sensilla density may be an important precursor to the evolution of social behavior."

"This study demonstrates that changes in social structure are reflected in changes to the sensory systems of insects," she said. "[It] not only illustrates the evolutionary shift from reproducing as an individual to having to coordinate reproduction as a group, but also how this behavioral change can create an evolutionary feedback loop in which traits are selected in order to increase sociality in subsequent generations."

Other authors on the paper, "Solitary bees reduce investment in communication compared with their social relatives" published online May 22 in Proceedings of the National Academy of Sciences, were Bernadette Wittwer and Mark Elgar of School of BioSciences, University of Melbourne; Abraham Hefetz and Tovit Simon of the Department of Zoology, George S. Wise Faculty of Life Sciences at Tel-Aviv University; and Li Murphy and Naomi Pierce of the Museum of Comparative Zoology, Department of Organismic and Evolutionary Biology at Harvard University.

The research was supported in part by the Holsworth Research Wildlife Endowment, the National Science Foundation (IOS-1257543), the Norman and Rose Lederer Chair of Biology at Tel-Aviv-University and Princeton University.