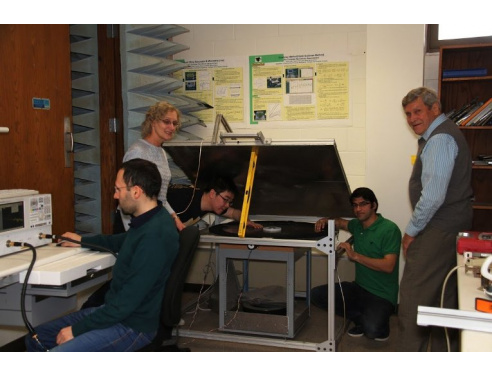 Almost as elusive as unicorns, finding practical materials for invisibility cloaking is challenging. Michigan Technological University researchers have new ideas how to solve that.

Metamaterials made from metal elements initially proposed for constructing invisibility cloaks, did not solve some important cloaking problems.

There are three challenges remaining. The first is controlling anisotropy—the variable behavior of propagating waves in different directions of the cloak medium. It's also important to make sure that the cloak materials can operate at microwave and optical wave frequencies. Finally, researchers have to decrease losses that restrict the size of hidden objects.

Elena Semouchkina, an associate professor of electrical and computer engineering, and her graduate students have developed several novel approaches to making invisibility cloaks more practical. Their latest work, published in a special issue of Journal of Optics on transformation optics, looks at a promising new way to manipulate electromagnetic waves to make objects appear invisible. The team developed an approach using photonic crystals.

The Science of Invisibility

Becoming invisible is no magic trick. Making objects invisible comes down to redirecting electromagnetic waves. The cloak medium needs to bend the paths of waves around an area to hide an object and accelerate waves along the bent trajectories. Based on the principles of transformation optics, there are equations that can predict what spatial dispersion of material properties will warp electromagnetic waves properly.

To provide the prescribed dispersions, Semouchkina and her team started by using metamaterials that were composed not from metal, but dielectric resonators. Dielectric materials have negligible conductivity and low losses; dielectric resonators cause electromagnetic waves to bounce back and forth much like a tuning fork acts as a sound resonator. This allows for controlling wave propagation in the cloak medium.

Based on this insight, Semouchkina's lab developed cloak designs for microwave and infrared frequency ranges using, respectively, ceramic and chalcogenide glass resonators. Later, they proposed another approach to cloaking objects by using multilayer coatings formed from ordinary dielectrics. In order to suppress wave scattering from a cloaked object, they optimized the dielectric properties and thicknesses of layers.  Then to hide a larger object, the group came up with another approach using specially designed dielectric lenses to cloak a bigger space.

Now, they're turning to building the cloak medium from periodic structures known as photonic crystals. Specifically, they are using properly structured crystals composed of dielectric rods. Unlike metamaterials, the resonances in these crystal “atoms” do not define wave transmission. As such, photonic crystals show a lot of promise for invisibility cloaking.

Photonic crystals that Semouchkina and her team employ for the cloak medium are able to provide superluminal phase velocity of propagating waves. That is, the waves move faster than the speed of light.

Such velocity allows for preserving the original wave front while waves curve past the cloaked object. Like a diamond refracting light into many hues, these photonic crystals also possess the required anisotropy of their refractive indices. That means wave phase velocities are different between the various crystal faces. In terms of cloaking, these counteracting wave speeds would create the illusion of invisibility.

"The key point to solving the anisotropy problem is varying the lattice parameters of the crystals in desirable directions," Semouchkina says.

The applications for cloaking range as far as imaginations can go and would be useful for both national security and industry. And while invisibility cloaks seem mystical, the science is simply controlling the flow of light.