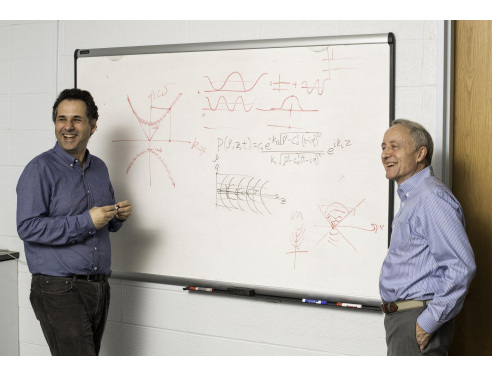 A new beam pattern devised by University of Rochester researchers could bring unprecedented sharpness to ultrasound and radar images, burn precise holes in manufactured materials at a nano scale -- even etch new properties onto their surfaces.

These are just a few of the items on the "Christmas tree" of possible applications for the beam pattern that Miguel Alonso, professor of optics, and Kevin Parker, the William F. May Professor of Engineering, describe in a recent paper in Optics Express.

The pattern results from what Parker calls "an analytically beautiful mathematical solution" that Alonso devised. It causes a light or sound wave to collapse inward, forming -- during a mere nanosecond or less -- an incredibly thin, intense beam before the wave expands outward again.

"All the energy fits together in time and space so it comes together -- BAM! -- like a crescendo," says Parker, explosively clapping his hands for emphasis. "It can be done with an optical light wave, with ultrasound, radar, sonar -- it will work for all of them."

Most traditional beam patterns maintain a persistent shape as long as the source is operating. However, they are not as intense as the beam created by Parker and Alonso, which the researchers call a "needle pulse beam." "It is very localized, with no extensions or side lobes that would carry energy away from the main beam," says Alonso.

Side lobes, radiating off a beam like the halos sometimes seen around a car headlight, are especially problematic in ultrasound. "Side lobes are the enemy," Alonso says. "You want to direct all of your ultrasound wave to the one thing you want to image, so then, whatever is reflected back will tell you about that one thing. If you're also getting a diffusion of waves elsewhere, it blurs the image."

Because it is incredibly narrow, the new beam "makes it possible to resolve things at exquisite resolutions, where you need to separate tiny things that are close together," Parker says, adding that the beam could have applications not only for ultrasound, but microscopy, radar, and sonar.

According to Alonso, industrial applications might include any form of laser materials processing that involves putting as much light as possible on a given line.

The idea for the needle pulse beam originated with Parker, an expert in ultrasound, who for inspiration often peruses mathematical functions from a century or more ago in the "ancient texts."

"I could see a general form of the solution; but I couldn't get past the equation," he says "So I went to the person (Alonso) who I consider the world's leading expert on optical theory and mathematics."

They came up with various expressions that were "mathematically correct," Alonso says, but corresponded to beams requiring an infinite amount of energy. The solution--"a particular mathematical trick" that could apply to a beam with finite energy -- came to him while swimming with his wife in Lake Ontario.

"Many of the ideas I have do not happen at my desk," Alonso says. "It happens while I'm riding my bicycle, or in the shower, or swimming, or doing something else--away from all the paperwork."

Parker says this discovery continues an international quest that began at the University of Rochester. In 1986 -- in the face of worldwide skepticism -- a University team including Joseph Eberly, the Andrew Carnegie Professor of Physics and professor of optics, offered evidence of an unexpected new, diffraction-free light form. The so-called Bessel beam is now widely used.

"It had been decades since anyone formulated a new type of beam," Parker says. "Then, as soon as the Bessel beam was announced, people were thinking there may be other new beams out there. The race was on.

"Finding a new beam pattern is a like finding a new element. It doesn't happen very often."