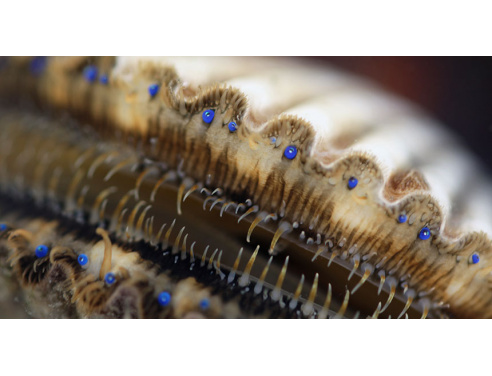 There’s stiff competition for the most elaborate eyeballs in the animal kingdom, but a mollusk that turns up on dinner plates might be a finalist.

Each of a scallop’s eyes — it has up to 200 of them, each about a millimeter in diameter — contains millions of perfectly square, flat crystals that build up into a mirrored mosaic, new research shows. And that shiny surface is curved in a way that lets a scallop focus light onto two different retinas.

Scientists have known for a long time that scallop eyes are unusual. In the 1960s, biologist Michael Land showed that each scallop eye uses a mirror to focus light into images, while most other eyes use lenses (SN: 5/28/16, p. 22). That natural mirror is made of crystals of guanine, Land determined — better known for its job as one of the four nucleotides that make up DNA. At the time, imaging technology wasn’t good enough to show how the bivalves built the mirror. Now, cryo-electron microscopy is bringing those blueprints out of their shell, researchers report in the Dec. 1 Science.

MIRROR, MIRROR Cryo-electron microscopy images show that the mirror in each scallop eye is made of tiny, perfectly square crystal tiles (shown) that together build a reflective mosaic.
B. PALMER ET AL/SCIENCE 2017

“It’s such an unusual visual system,” says Daniel Speiser, a marine ecologist at the University of South Carolina in Columbia who wasn’t part of the study. “The closer you look, the more puzzling it gets.”

For one thing, the guanine crystals that build the scallop’s eye mirror are perfectly square, says study coauthor Benjamin Palmer, a biologist at the Weizmann Institute of Science in Rehovot, Israel. “That's really weird,” he says. “It’s the first time we've seen a perfect square!”

Guanine doesn’t form crystal shapes that evenly pack together in the lab. That means that, somehow, the scallop is controlling the crystallization process, Palmer says. The square crystals fit together edge-to-edge like bathroom tiles to form a smooth surface that minimizes image distortion.

A single layer of this guanine mosaic is transparent. But each scallop eye stacks up 20 to 30 of these tiled sheets to create a reflective surface. The whole contraption is something like a telescope that pieces together hexagonal mirrors into one giant curve (SN: 4/30/16, p. 32).

A few other animals also have mirrored eyes, but rarely do those mirrors form a clear image like they do in scallops, Palmer says. The study examined Pecten maximus eyes, but other scallops in the same genus have a similarly intricate setup.

And the scallop’s eye mirror isn’t shaped like a perfect hemisphere, the researchers found. Instead, the mirror has an unusual 3-D shape that allows the scallop to focus light on one of two retinas, depending on the angle of the incoming light. One retina is tuned to dimmer light coming from the peripheral vision; the other best captures movement in bright light.

“This is a new idea for how the scallop can make use of both retinas in the same eye,” says Speiser — a question that’s long vexed scallop experts.

Sinking lots of energy into vision makes sense if you’re a predator who hunts by sight, Speiser adds. While scallops can spurt through the ocean by rhythmically snapping their bivalve shells open and shut like Pac-Man, the sea creatures are filter feeders that don’t need to stalk their prey. So why they have so many eyes and such complexity within each eye remains a mystery.